5 Canons (1997), for solo harpsichord, was written for Kevin Bowyer who is internationally known for his interpretations, at the organ, of the music of J.S. Bach. He was beginning (in the 1990s) to give harpsichord recitals and this piece was commissioned as part of this new venture.

To my mind, something of Bach had to be present in the initial idea and I found myself drawn to three significant works where canonic writing is strongly in evidence: The Musical Offering, The Goldberg Variations and The Art of Fugue. Such works seemed to me to personify the musicality of Bowyer, an acclaimed technician who projects a vibrant musicality.

All five canons are cancrizanic (the second line is in retrograde): two offset the imitation at a distance of a semiquaver (Nos 1 and 2), two are rhythmic mirror cannons (Nos 3 and 4) and one is a mensuration or proportional canon (No. 5). All the pitches are derived from scales: only the first is strictly by interval. A summary of the procedures used in each canon is given below.

Canon No. 1 is constructed from a mirrored u-scale (unnamed scale) made up of random tones and semitones, set at a distance of an augmented fourth between the hands. The construction of the tessitura shapes of each hand are important and are clearly audible: the L.H. gradually rising, the right (because it is the retrograde of the R.H.), gradually falling.

Is constructed from a whole-range scale (i.e. a scale which covers the whole range of the instrument). In this canon the voices are inverted, so the gradually rising, gradually falling outline in the first half of the right hand is mirrored by a gradually falling, gradually rising, profile in the second half of the L.H.. The two voices are transposed by a major second but this time the transposition is not by interval – it is to a higher degree in the whole-range scale (so the intervals change). The combination of the rigid mechanics of the cancrizan and the subtly changing sonorities of aurally similar sections (which are a perfect rhythmical mirror), produces a significant harmonic flux. The only corruption of the cancrizan is in the R.H., in the last bar, where a long note is replaced by a trill, to mirror the left, and to finish the movement as an upbeat to the next.

This canon is by strict rhythmic cancrizan, each part being an exact mirror of the other. The mirrored sections, however, are rearranged by tessitura as the following examples show:

Example 1 shows bars 22-25 in their original form. In their corresponding mirrored form, in Example 2, the right hand is a rhythmic mirror of the L.H. (in Ex. 1): the L.H. is a mirror of the right. The tessitura bands, however, in the second example have moved from ‘low’ to ‘high’.

A canon by augmentation. The L.H. is a retrograde, inverted version of the subject (the first half of the piece in the right hand) at half speed. The subject is a decelerating, falling line which, in the R.H., is later inverted and reversed, thus becoming faster and higher. This coincides with the gradually accelerating L.H. to finish on a rush of notes at opposite ends of the keyboard. There are three different scales, all with the same number of pitches, but each with a different intervallic structure: scales 1 and 2 have similar intervals, whereas scale 3 allows wider intervals to extend the L.H. towards the lowest region of the keyboard. These scales are shown below:

Ex. 3: The three scales from Canon No.5 showing how the intervallic structure of the canon progresses 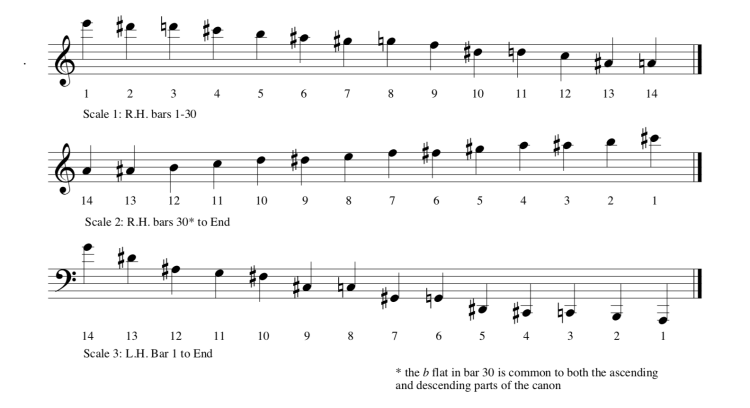 Canons are rigid and mechanical structures. They have, at different times in music history, been seen as both the ultimate test of the craft of composition and as the worst manifestation of doctrinaire thinking. The canon has, however, had a continuous history (under various names and guises) since the 14th century and no less in the 20th century, where its principles were embedded in serial technique. In 5 Canons, I attempted to embrace the mechanistic tendencies of the canon (especially in No.4 ) whilst consciously softening those procedures by using imaginative diatonic arrangements of scales (particularly No. 3). As a group of pieces, consideration was also given to the overall design; to contrast tempi, musical figuration and canonic rubrics to create a musically varied set of pieces.